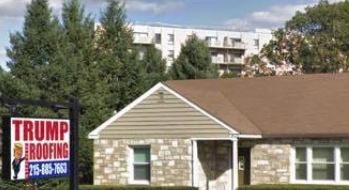 Joe Wade, from Bucks County in Pennsylvania started a new roofing company in 2018.  He liked Donald Trump’s slogan “Make America Great Again”, so he decided to name his company “Trump Roofing” and use the slogan “Make Your Roof Great Again”.

Before using the new business name,  spent a few thousand dollars a week advertising online.  He says the attention he gets brings in free advertising now.  It has also brought criticism, stolen signs, and negative posts on his Facebook page.

His business has been growing, and now Trump Roofing has offices in Allentown and Abington. 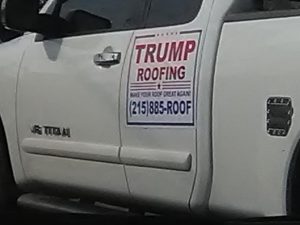 Wade’s business branding is similar to that of Trump’s political branding and his sign features a cartoon version of Donald Trump.

Trump Roofing employs eight people, full-time, and Wade has four subcontracted crews to do work, as well, because he’s so busy.

Wade knows that he may be losing business to certain people due to the name.   He said, “You might be alienating 50% of the people, but like any business, if you get 1% of the 50, you’re making millions of dollars.”

If Wade’s looking to make a deal with a Democrat, he’ll admit that there are “certain good things” about Trump “and certain bad things.” 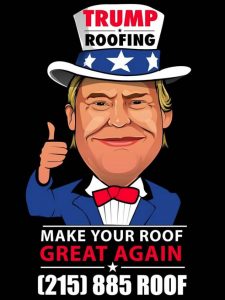 “Overall, the reaction’s been pretty great,” he said. “One woman, when she saw the sign, said, ‘I knew he did walls. I didn’t know he did roofs, too.’”

Information for this article was adapted from a news item posted in The Philadelphia Inquirer.