Because these hammers vary in style and use, they are listed in no particular order.  Pro and cons, along with reviews can be found by clicking the link at the bottom of each description. 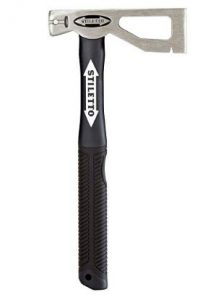 Although not usually listed as a roofing hammer, the Stiletto Titanium Lathe Axe (also listed as a lather’s hatchet) is popular with shingle roofers because of its light, sleek design (and because it looks like an impressive weapon).

With the combination of titanium and fiberglass, the hammer head weighs in at just 10 ounces.  The total weight is 1.3 pounds.  The lathe axe has the comparable striking force of a 24 ounce steel hammer, while putting less stress on your body.

It has a milled finish head with a rubber coated poly/fiberglass handle. The handle is 13 inches long.  This hammer also features a magnetic nail starter.  READ MORE REVIEWS

The Picard Roofer’s Hammer (0079010) weighs in at about 2 pounds and is great for roofing, especially slate roofing. It has a checked head for better grip on nails, and also a magnetic nail set.  The hammer also has a claw for pulling nails. Its main feature is a pointed tip that is great for punching holes in slate.  The body is solid steel and the handle has a comfortable leather grip.  READ MORE REVIEWS

The AJC Roofing Hatchet is popular with shingle roofers. It has a magnetic head that works well for installing cap nails.  The head also features a nail puller.  Other features are a shingle guide and built-in knife for cutting shingles and underlayment.  This model has a solid wood handle and weighs 1.64 pounds. READ MORE REVIEWS

The Stortz Slate Hammer is designed specifically for slate roof work.  It weights 28 ounces and has a leather handle grip.  The hammer’s head has a checkered face to help grip nails when hammering.  The hammer has a sharp point to punch holes in slate.  It has a double-sided claw for removing nails.  The shank of the hammer is beveled in order to be used for trimming slate. Often a slate anvil is used in conjunction with the hammer.  FIND OUT MORE