BBC England– Six gang members who carried out substandard or unnecessary roofing work for vulnerable elderly customers have been jailed. 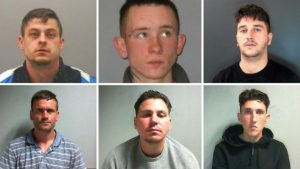 They were found guilty at Teesside Crown Court, along with two other men who were sentenced to community orders.

Judge Sean Morris said it was a “well-organised fraud that set out to fleece elderly people of their savings”.

The sentences ranged from 12-month community orders to almost four years in jail.

He called Shaun Doyle “one of, if not the, main player” in the gang, describing him as “disgraceful” and a “very unpleasant offender”.

“It is quite clear there was deliberate targeting of them [the victims] because they were very vulnerable, frail, fearful, forgetful, and over-trusting,” he said.

In a statement to court one of the victims, from Thornaby, said he felt he had been “gullible”, the council said.

“I’m disappointed in myself for letting this happen,” the man said.

“They were happy to rip me off; they were so careless in what they did on my roof and I even had to pay for the damage they caused on my neighbour’s roof.”

North Yorkshire County Council trading standards, which investigated the gang, said an 89-year-old Richmond man had been driven to banks in Darlington on three occasions to transfer a total of £17,000.

Police were alerted by a member of the public who overheard the man talking to a bank cashier.

The council said its surveyor called the work “unfit for purpose” and worth just £600.

Householders had been overcharged for “unnecessary, incomplete and inadequate work”, it said.

Paul Masterton and his son James were also ordered to pay £1,000 compensation to the victim in Richmond.

Doyle and Flannigan were given indefinite criminal behaviour orders, preventing them cold calling and carrying out residential work for anyone over 60.