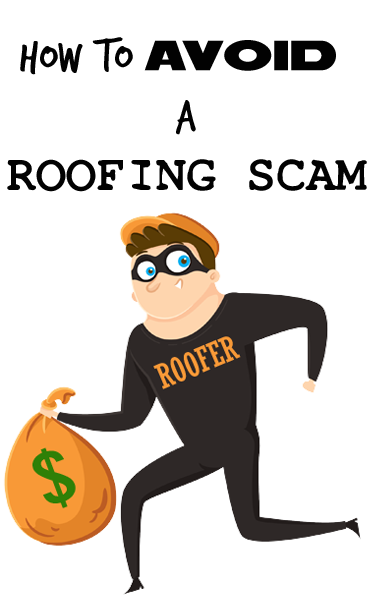 Roofing Contractor Scams and How To Avoid Them

Contractor scams are common, and roofing scams are often easier to pull off on unsuspecting homeowners.  With roofs being high and sometimes out of sight from the ground, it is easier to not complete work as promised by the roofer, because the homeowner will never see it.  Storm damage, which often requires rapid action by a homeowner to prevent further interior damage, often causes a frantic homeowner to make unwise decisions when choosing a contractor.

Here are a few different types of roofers who take advantage of homeowners, and how to prevent yourself from being ripped-off.

A fake roofer is not a roofer at all.  He is the ultimate scammer.  He poses as a roofer, but most likely has no roofing experience.  He will go door-to-door claiming he is working in the area and sees roof damage on your home.  He will offer a reduced repair rate, and try to get a downpayment (usually cash), promising to come back and do the work.  He may have fake credentials- or even use another roofer’s information in order to look legitimate.

This type of roofer isn’t necessarily trying to scam- he may be just a bad at business management and/or have poor roofing skills.  He may misrepresent his skills.  He may “talk big” about his experience, but in reality, he doesn’t know much about proper roof maintenance, repairs, or replacement at all.  The homeowner thinks they are getting a qualified roofer to fix a roof leak, but is “scammed” because the roof is not professionally repaired.

Another type of dishonest roofer can often be a storm chaser.  A storm chaser is a roofer who uses the opportunity of storm damage to gain business.  A storm chaser will quickly canvass a neighborhood after a storm, looking for work.  Not all storm chasers are dishonest.  Many storm chasers are qualified, legitimate roofing companies, who work with insurance agencies.  They are aggressive because they are just trying to stay ahead of the roofing competition in the area.  On the other hand, some storm chasing roofers are only looking for a quick buck.  Some storm chasers may not be properly licensed, insured, or experienced.  A storm chaser may claim to be connected to an insurance company and try to get a downpayment, while promising that the homeowner will get paid back by the insurance company.  They may promise that you will pay nothing for your roof, and not even have to pay for the deductible.  They may do inferior work, or simply take the money and not do the work at all.  Some storm chasers may not be roofers at all, but may only be collecting jobs and passing them on to legitimate roofers for a finder’s fee.

These tips won’t guarantee that you won’t be taken by a dishonest roofer, but may help minimize your chances of losing money to a roofing scam.

1.  Don’t be pressured to make an immediate decision.

Don’t be intimidated by a high-pressure sales pitch or a “special one-day only deal”.  Door-to-door sales is a legitimate method of advertising, but be wary of a roofer who comes to your door unsolicited, claiming you have roof damage that needs to be corrected immediately, or offering special cash-only deals.

A major roof leak or storm damage can cause panic, but don’t make a split-second decision due to your own desperation.

2.  Find out if they are a legitimate and legal business.

Not all roofers advertise on the internet, but most do.  Even roofers who don’t have a website will most likely have a Google business listing, or be listed somewhere on social media, or in an online directory, unless their business is brand new.  Many states have some form of contractor licensing or registration. Many states also require liability insurance. Ask for the roofing company’s credentials and verify with the proper agency.

Ask neighbors and friends who they recommend as a roofer.  If you feel unsure about a roofer, ask for a few referrals from your neighborhood.  Follow up on the referrals.  Check online for any negative reviews.  Keep in mind that not all negative reviews are legitimate, just as all positive reviews may not necessarily be legitimate.

Don’t just rely on one estimate if you are unsure.  Get at least 2 or 3 estimates.  Don’t judge on price alone.

Make sure you are comfortable with the terms of the contract.  Ask for a warranty if the roofer hasn’t offered one.

6.  Only give a downpayment to a contractor you fully trust.  Don’t pay in full until the job is completed.

A partial downpayment for a larger job is not unreasonable.  One-third of the total amount is a common downpayment request.  This often gives a contractor reassurance that he won’t get scammed by the homeowner, and often provides funds to purchase materials.  If you feel uneasy about a contractor, don’t give him a dime.  Don’t provide full payment until you are satisfied the work is completed as specified in the contract.